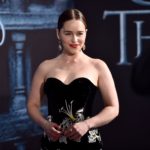 Emilia Clarke was included in the list of 100 most influential people in the world by Time magazine in 2019 but she’s more popular as Daenerys Targaryen of Game of Thrones. Emilia Clarke is also known for her workout & diet routines.

Emilia Clarke is a petite actress with just 5’2” feet (1.57 m) height and only 52 kg (115 lbs) weight. But she looks hot and was just perfect for the character of Daenerys Targaryen who transformed her personality from a frightened girl to a powerful woman. And Emilia Clarke was the right actress to essay that character.… Find more